But what does it mean?

You’ve probably already seen a boss babe around, you may know one… you may even BE one!

She’s strong, confident, fearless… just to name a few. She’s the type of gal whose personality is magnetic. She knows what she wants and how to get it. And the best news is that she’s here to stay!

Women make up nearly 41% of new entrepreneurs and that only continues to rise!

SHINE SHINES ON was started by our very own boss babe.

Kim Davey created SHE SHINES ON to inspire girls to believe that they can follow their dreams. As a young girl, Kim was passionate about dance, theatre and television, but when it came time to choose a career, she heard that tired refrain – “You can’t make a living in the arts!” – so she became a lawyer instead.

After graduating, she lasted only 7 weeks (yes, weeks!) working in a law firm before realising she wasn’t being true to herself.

She vowed to change this. She travelled to all 7 continents and took part in numerous personal development trainings, which lit the spark in her to create the life of her dreams, boldly and without hesitation.

Through these experiences she began to see that if you believe in yourself then you really can turn your dreams into reality. That’s what Kim wants every girl to believe who comes on tour with SHE SHINES ON.

Hence, SHE SHINES ON was born- travel, personal development, and performing arts all rolled into one! It’s our founder’s passion, and she wants to share it with you so you can pursue your passions, like the boss babe that YOU are! 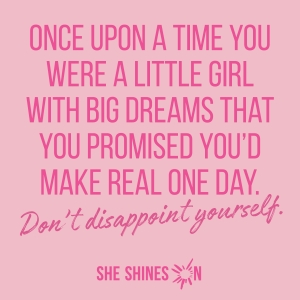